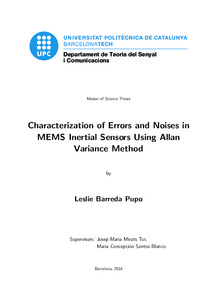 Except where otherwise noted, content on this work is licensed under a Creative Commons license : Attribution-NonCommercial-NoDerivs 3.0 Spain
Abstract
This thesis work has addressed the problems of characterizing and identifying the noises inherent to inertial sensors as gyros and accelerometers, which are embedded in inertial navigation systems, with the purpose of estimating the errors on the obtained position. The analysis of the Allan Variance method (AVAR) to characterize and identify the noises related to these sensors, has been done. The practical implementation of the AVAR method for the noises characterization has been performed over an experimental setup using the IMU 3DM-GX3 -25 data and the Matlab environment. From the AVAR plots it was possible to identify the Angle Random Walk and the Bias Instability in the gyros, and the Velocity Random Walk and Bias Instability in the accelerometers. A denoising process was also performed by using the Discrete Wavelet Transforms and the Median Filter. After the filtering the AVAR plots showed that the ARW was almost removed or attenuated using Wavelets, but not good results were obtained with the Median Filter.
SubjectsAccelerometers, Global Positioning System, Acceleròmetres, Sistema de posicionament global
URIhttp://hdl.handle.net/2117/103849
Collections
Share: