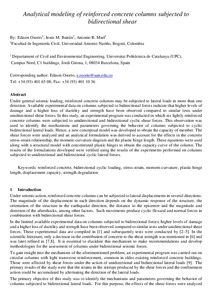 Document typeArticle
Rights accessOpen Access
Abstract
Under general seismic loading, reinforced concrete columns may be subjected to lateral loads in more than one direction. Available experimental data on columns subjected to bidirectional forces indicate that higher levels of damage and a higher loss of ductility and strength have been observed compared to similar tests under unidirectional shear forces. In this study, an experimental program was conducted in which six lightly reinforced concrete columns were subjected to unidirectional and bidirectional cyclic shear forces. This observation was used to identify the mechanisms and parameters governing the behavior of columns subjected to cyclic bidirectional lateral loads. Hence, a new conceptual model was developed to obtain the capacity of member. The shear forces were analyzed and an analytical formulation was derived to account for the effects in the concrete stress-strain relationship, the moment-curvature diagram and the plastic hinge length. These equations were used along with a structural model with concentrated plastic hinges to obtain the capacity curve of the column. The results of the formulations developed were verified using the results of the experiments performed on columns subjected to unidirectional and bidirectional cyclic lateral forces.
CitationOsorio, E., Bairan, J.M., Mari, A. Analytical modeling of reinforced concrete columns subjected to bidirectional shear. "Engineering structures", 1 Maig 2017, vol. 138, p. 458-472.
URIhttp://hdl.handle.net/2117/103819
DOI10.1016/j.engstruct.2017.02.029
ISSN0141-0296
Publisher versionhttp://www.sciencedirect.com/science/article/pii/S0141029617304571
Collections
Share: