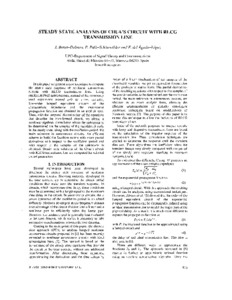 Document typeConference report
PublisherInstitute of Electrical and Electronics Engineers (IEEE)
Rights accessOpen Access
Abstract
In this paper we present a new technique to compute the steady state response of nonlinear autonomous circuits with RLCG transmission lines. Using multipoint Pade approximants, instead of the commonly used expansions around s=0 or s/spl rarr//spl infin/ accurate, low-order lumped equivalent circuits of the characteristic impedance and the exponential propagation function are obtained in an explicit way. Then, with the temporal discretization of the equations that describe the transformed circuit, we obtain a nonlinear algebraic formulation where the unknowns to be determined are the samples of the variables directly in the steady state, along with the oscillation period, the main unknown in autonomous circuits. An efficient scheme to build the Jacobian matrix with exact partial derivatives with respect to the oscillation period and with respect to the samples of the unknowns is obtained. Steady state solutions of the Chua's circuit with RLCG transmission line are computed for selected circuit parameters.
CitationBonet-Dalmau, J., Palà-Schönwälder, P., Aguila, F. Steady state analysis of Chua's circuit with RLCG transmission line. A: IEEE International Conference on Electronics, Circuits and Systems. "ICECS'99. The 6th International Conference on Electronics, Circuits and Systems". Pafos: Institute of Electrical and Electronics Engineers (IEEE), 1999, p. 819-822.
URIhttp://hdl.handle.net/2117/103803
DOI10.1109/ICECS.1999.813234
ISBN0-7803-5691-8
Publisher versionhttp://ieeexplore.ieee.org/document/813234/
Collections
Share: