Beamforming and Multiuser Detection in CDMA Systems with External Interferences 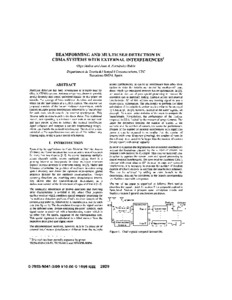 Document typeConference report
PublisherICASSP'99
Rights accessOpen Access
Abstract
Multiuser detection has been investigated to mitigate the near-far effect in CDMA systems. Antenna arrays have been shown to provide spatial diversity and cancel undesired signals. In this paper we consider the synergy of both multiuser detection and antenna arrays for the base station of a CDMA system. The receiver we proposed consists of the known multiuser decorrelator, which cancels multiple-access interferences followed by a beamformer for each user, which cancels the external interferences. This receiver adds an extra branch to the decorrelator. This additional branch, corresponding to a fictitious user with an unused code and zero power, allows to estimate the external interference signal subspace and compute a suitable beamforming weight-vector that cancels the external interferences. The receiver is also extended to the asynchronous case and all of this without any training signal or any a priori spatial information.
CitationMuñoz, O., Fernandez, J. Beamforming and Multiuser Detection in CDMA Systems with External Interferences. A: IEEE International Conference on Acoustics, Speech, and Signal Processing. "Proceedings of ICASSP'99". Phoenix, Arizona: ICASSP'99, 1999, p. 2929-2932.
URIhttp://hdl.handle.net/2117/103763
DOI10.1109/ICASSP.1999.761376
Publisher versionhttp://ieeexplore.ieee.org/document/761376/
Collections
Share: