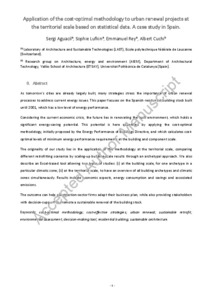 Document typeArticle
Rights accessOpen Access
Abstract
As tomorrow’s cities are already largely built, many strategies stress the importance of urban renewal processes to address current energy issues. This paper focuses on the Spanish residential building stock built until 2001, which has a low level of energy performance. Considering the current economic crisis, the future lies in renovating the built environment, which holds a significant energy-saving potential. This potential is here quantified by applying the cost-optimal methodology, initially proposed by the Energy Performance of Buildings Directive, and which calculates cost-optimal levels of minimum energy performance requirements at the building and component scale. The originality of our study lies in the application of this methodology at the territorial scale, comparing different retrofitting scenarios by scaling-up building-scale results through an archetypal approach. We also describe an Excel-based tool allowing two types of studies: (i) at the building scale, for one archetype in a particular climatic zone; (ii) at the territorial scale, to have an overview of all building archetypes and climatic zones simultaneously. Results include economic aspects, energy consumption and savings and associated emissions. The outcome can help construction-sector firms adapt their business plan, while also providing stakeholders with decision-support to promote a sustainable renewal of the building stock.
CitationAguacil, S., Lufkin, S., Rey, E., Cuchi, A. Application of the cost-optimal methodology to urban renewal projects at the territorial scale based on statistical data—A case study in Spain. "Energy and buildings", 1 Juny 2017, vol. 144, p. 1-19.
URIhttp://hdl.handle.net/2117/103749
DOI10.1016/j.enbuild.2017.03.047
ISSN0378-7788
Publisher versionhttp://www.sciencedirect.com/science/article/pii/S0378778817309520
Collections
Share: