Annotation and representation of a diachronic corpus of Spanish 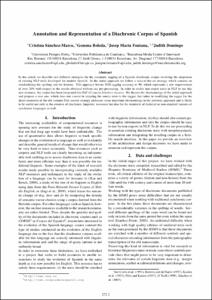 Show full item record
Sánchez-Marco, Cristina
Boleda Torrent, Gemma
Fontana, Josep Maria
Domingo, Judith
Document typeConference report
Rights accessOpen Access
Abstract
In this article we describe two different strategies for the automatic tagging of a Spanish diachronic corpus involving the adaptation of existing NLP tools developed for modern Spanish. In the initial approach we follow a state-of-the-art strategy, which consists on standardizing the spelling and the lexicon. This approach boosts POS-tagging accuracy to 90, which represents a raw improvement of over 20% with respect to the results obtained without any pre-processing. In order to enable non-expert users in NLP to use this new resource, the corpus has been integrated into IAC (Corpora Interface Access). We discuss the shortcomings of the initial approach and propose a new one, which does not consist in adapting the source texts to the tagger, but rather in modifying the tagger for the direct treatment of the old variants.This second strategy addresses some important shortcomings in the previous approach and is likely to be useful not only in the creation of diachronic linguistic resources but also for the treatment of dialectal or non-standard variants of synchronic languages as well.
CitationSánchez-Marco, C. [et al.]. Annotation and representation of a diachronic corpus of Spanish. A: International Conference on Language Resources and Evaluation. "International Conference on Language Resources and Evaluation (LREC 2010)". 2010.
URIhttp://hdl.handle.net/2117/10373
ISBN2-9517408-6-7
Collections
Share: