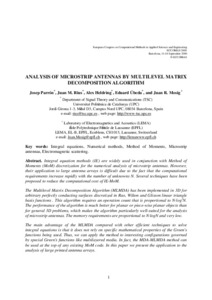 Mosig, Juan R
Document typeConference report
PublisherESA
Rights accessOpen Access
Abstract
Integral equation methods (IE) are widely used in conjunction with Method of Moments (MoM) discretization for the numerical analysis of microstrip antennas. However, their application to large antenna arrays is difficult due to the fact that the computational requirements increase rapidly with the number of unknowns N. Several techniques have been proposed to reduce the computational cost of IE-MoM. The Multilevel Matrix Decomposition Algorithm (MLMDA) has been implemented in 3D for arbitrary perfectly conducting surfaces discretized in Rao, Wilton and Glisson linear triangle basis functions . This algorithm requires an operation count that is proportional to N·log2N. The performance of the algorithm is much better for planar or piece-wise planar objects than for general 3D problems, which makes the algorithm particularly well-suited for the analysis of microstrip antennas. The memory requirements are proportional to N·logN and very low. The main advantage of the MLMDA compared with other efficient techniques to solve integral equations is that it does not rely on specific mathematical properties of the Green's functions being used. Thus, we can apply the method to interesting configurations governed by special Green's functions like multilayered media. In fact, the MDA-MLMDA method can be used at the top of any existing MoM code. In this paper we present the application to the analysis of large printed antenna arrays.
CitationParron, J., Rius, J., Heldring, A., Ubeda, E., Mosig, J. Analysis of microstrip antennas by multilevel matrix decomposition algorithm. A: Millenium Conference on Antennas and Propagation. "Millenium Conference on Antennas and Propagation (AP2000)". Davos: ESA, 1999.
URIhttp://hdl.handle.net/2117/103715
ISBN92-9092-776-3
Collections
Share: