The DICEMAN description schemes for still images and video sequences 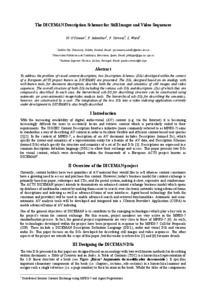 Correia, P.
Document typeConference report
PublisherHHI
Rights accessOpen Access
Abstract
To address the problem of visual content description, two Description Schemes (DSs) developed within the context of a European ACTS project known as DICEMAN, are presented. The DSs, designed based on an analogy with well-known tools for document description, describe both the structure and semantics of still images and video sequences. The overall structure of both DSs including the various sub-DSs and descriptors (Ds) of which they are composed is described. In each case, the hierarchical sub-DS for describing structure can be constructed using automatic (or semi-automatic) image/video analysis tools. The hierarchical sub-DSs for describing the semantics, however, are constructed by a user. The integration of the two DSs into a video indexing application currently under development in DICEMAN is also briefly described.
CitationO'Connor, N., Salembier, P., Correia, P. The DICEMAN description schemes for still images and video sequences. A: Image Analysis for Multimedia Application Services. "Image Analysis for Multimedia Application Services". HHI, 1999, p. 25-34.
URIhttp://hdl.handle.net/2117/103714
Collections
Share: