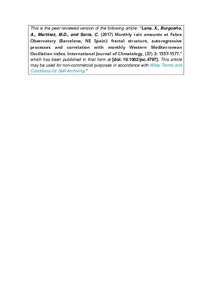 Monthly rain amounts (MRA) recorded at Fabra Observatory (Barcelona, NE Spain) since 1917–2010, are analysed from two complementary points of view. First, mono- and multifractal characteristics of MRA are compared with those corresponding to the monthly Western Mediterranean Oscillation index (WeMOi), which affects the rainfall regime at the western Mediterranean region. Monofractality is analysed through Hurst and Hausdorff exponents, and a power law describing the dependence of MRA power spectra on frequency. The reconstruction theorem permits to quantify the complexity of the physical process by means of the correlation dimension and the Kolmogorov entropy. In agreement with this theorem, the predictive instability is also evaluated through the Lyapunov exponents. The multifractality is characterized by the critical Hölder exponent, as well as by the asymmetry and spectral width of the multifractal spectrum. Second, three predictive processes for MRA are tested. One of them is based on the assumption that MRA could be simulated by fractional Gaussian noise. The other two are, by one hand, an ARIMA(p,1,0) process for MRA; on the other hand, an adaptation of the ARIMA process for MRA taking as arguments preceding WeMOi. Finally, relationships between MRA and WeMOi confirm that outstanding MRA use to be coincident with negative WeMOi. An explanation is also proposed for the non-negligible number of MRA corresponding to positive WeMOi.
CitationLana, F.J., Burgueño, A., Martinez, M.D., Serra, C. Monthly rain amounts at Fabra Observatory (Barcelona, NE Spain): fractal structure, autoregressive processes and correlation with monthly Western Mediterranean Oscillation index. "International journal of climatology", 15 Març 2017, vol. 37, núm. 3, p. 1557-1577.
URIhttp://hdl.handle.net/2117/103712
DOI10.1002/joc.4797
ISSN0899-8418
Publisher versionhttp://onlinelibrary.wiley.com/doi/10.1002/joc.4797/abstract