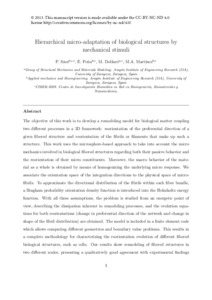 Except where otherwise noted, content on this work is licensed under a Creative Commons license : Attribution-NonCommercial-NoDerivs 3.0 Spain
Abstract
Remodeling and other evolving processes such as growth or morphogenesis are key factors in the evolution of biological tissue in response to both external and internal epigenetic stimuli. Based on the description of these processes provided by Taber, 1995 and Humphrey et al., 2002 for three important adaptation processes, remodeling, morphogenesis and growth (positive and negative), we shall consider the latter as the increase/decrease of mass via the increase/decrease of the number or size of cells, leading to a change in the volume of the organ. The work of Rodriguez et al. (1994) used the concept of natural configuration previously introduced by Skalak et al. (1982) to formulate volumetric growth. Later, Humphrey et al. (2002) proposed a constrained-mixture theory where changes in the density and mass of different constituents were taken into account. Many other works about biological growth have been presented in recent years, see e.g. Imatani and Maugin, 2002, Garikipati et al., 2004, Gleason and Humphrey, 2004, Menzel, 2004, Amar et al., 2005, Ganghoffer et al., 2005, Ateshian, 2007, Goriely et al., 2007, Kuhl et al., 2007, Ganghoffer, 2010a, Ganghoffer, 2010b and Goktepe et al., 2010. Morphogenesis is associated to changes in the structure shape (Taber, 1995 and Taber, 2009) while remodeling denotes changes in the tissue microstructure via the reorganization of the existing constituents or the synthesis of new ones with negligible volume change. All these processes involve changes in material properties. Although remodeling and growth can, and usually do, occur simultaneously, there are some cases where these processes develop in a decoupled way. For example, Stopak and Harris (1982) reported some experimental results showing remodeling driven by fibroblasts, with no volume growth. We will assume this scenario in this contribution, focusing exclusively on remodeling processes and on the reorientation of fibered biological structures. It is well known that biological tissue remodels itself when driven by a given stimulus, e.g. mechanical loads such as an increase in blood pressure, or changes in the chemical environment that control the signaling processes and the overall evolution of the tissue. Biological remodeling can occur in any kind of biological tissue. In particular, the study of collagen as the most important substance to be remodeled, in all its types (preferentially
CitationSaez, P., Pena, E., Doblaré, M., Martínez, M.A. Hierarchical micro-adaptation of biological structures by mechanical stimuli. "International journal of solids and structures", 2013, vol. 50, núm. 14-15, p. 2353-2370.
URIhttp://hdl.handle.net/2117/103710
DOI10.1016/j.ijsolstr.2013.03.029
ISSN0020-7683
Publisher versionhttp://www.sciencedirect.com/science/article/pii/S0020768313001388
Collections
Share: