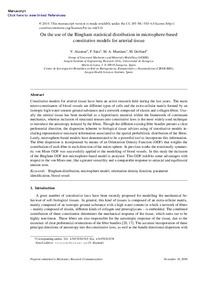 Martínez, M.A,
Doblaré, Manuel
Document typeArticle
Rights accessOpen Access
Abstract
Constitutive models for arterial tissue have been an active research field during the last years. The main micro-constituents of blood vessels are different types of cells and the extra-cellular matrix formed by an isotropic high water content ground substance and a network composed of elastin and collagen fibres. Usually the arterial tissue has been modelled as a hyperelastic material within the framework of continuum mechanics, whereas inclusion of structural tensors into constitutive laws is the most widely used technique to introduce the anisotropy induced by the fibres. Though the different existing fibre bundles present a clear preferential direction, the dispersion inherent to biological tissue advices using of constitutive models including representative structural information associated to the spatial probabilistic distribution of the fibres. Lately, microsphere-based models have demonstrated to be a powerful tool to incorporate this information. The fibre dispersion is incorporated by means of an Orientation Density Function (ODF) that weights the contribution of each fibre in each direction of the micro-sphere. In previous works the rotationally symmetric von Mises ODF was successfully applied to the modelling of blood vessels. In this study, the inclusion of the Bingham ODF into microsphere-based model is analysed. This ODF exhibits some advantages with respect to the von Mises one, like a greater versatility and a comparable response to simple tension and equibiaxial tension tests.
CitationAlastrué, V., Saez, P., Martínez, M., Doblaré, M. On the use of the Bingham statistical distribution in microsphere-based constitutive models for arterial tissue. "Mechanics research communications", 2010, vol. 37, núm. 8, p. 700-706.
URIhttp://hdl.handle.net/2117/103708
DOI10.1016/j.mechrescom.2010.10.001
ISSN0093-6413
Publisher versionhttp://www.sciencedirect.com/science/article/pii/S0093641310001412
Collections
Share: