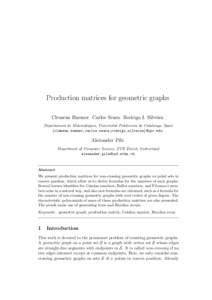 Document typeArticle
Rights accessOpen Access
Abstract
We present production matrices for non-crossing geometric graphs on point sets in convex position, which allow us to derive formulas for the numbers of such graphs. Several known identities for Catalan numbers, Ballot numbers, and Fibonacci numbers arise in a natural way, and also new formulas are obtained, such as a formula for the number of non-crossing geometric graphs with root vertex of given degree. The characteristic polynomials of some of these production matrices are also presented. The proofs make use of generating trees and Riordan arrays.
CitationHuemer, C., Pilz, A., Seara, C., Silveira, R.I. Production matrices for geometric graphs. "Electronic notes in discrete mathematics", 2016, vol. 54, p. 301-306.
URIhttp://hdl.handle.net/2117/103649
DOI10.1016/j.endm.2016.09.052
ISSN1571-0653
Publisher versionhttp://www.sciencedirect.com/science/journal/15710653
Collections
Share: