A matrix-based approach to the image moment problem 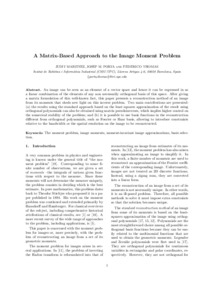 Document typeArticle
Rights accessOpen Access
Abstract
An image can be seen as an element of a vector space and hence it can be expressed in as a linear combination of the elements of any non necessarily orthogonal basis of this space. After giving a matrix formulation of this well-known fact, this paper presents a reconstruction method of an image from its moments that sheds new light on this inverse problem. Two main contributions are presented: (a) the results using the standard approach based on the least squares approximation of the result using orthogonal polynomials can also be obtained using matrix pseudoinverses, which implies higher control on the numerical stability of the problem; and (b) it is possible to use basis functions in the reconstruction different from orthogonal polynomials, such as Fourier or Haar basis, allowing to introduce constraints relative to the bandwidth or the spatial resolution on the image to be reconstructed.
Description
The final publication is available at link.springer.com
CitationMartínez , J., Porta, J.M., Thomas, F. A matrix-based approach to the image moment problem. "Journal of mathematical imaging and vision", Novembre 2006, vol. 26, núm. 1, p. 105-113.
URIhttp://hdl.handle.net/2117/103619
DOI10.1007/s10851-006-8454-1
ISSN0924-9907
Publisher versionhttp://link.springer.com/article/10.1007/s10851-006-8454-1
Collections
Share: