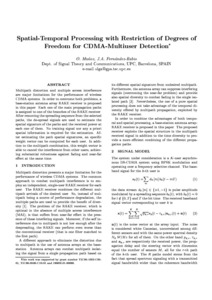 Document typeConference report
Rights accessOpen Access
Abstract
Multipath distortion and multiple access interference are major limitations for the performance of wireless CDMA systems. In order to overcome both problems, a base-station antenna array RAKE receiver is proposed in this paper. Each one of the main propagation paths is assigned to one of the branches of the RAKE receiver. After removing the spreading sequence from the selected paths, the de-spread signals are used to estimate the spatial signature of the paths and the received power at each one of them. No training signal nor any a priori spatial information is required for the estimation. After estimating the path spatial signatures, an specific weight vector can be computed for each user. In addition to the multipath combination, this weight vector is able to cancel the interference from other users, achieving substantial robustness against fading and near-far effect at the same time.
CitationMuñoz, O., Fernandez, J. Spatial-temporal processing with restriction of degrees of freedom for CDMA-multiuser detection. A: European Signal Processing Conference. "EUSIPCO 1998: Signal processing IX: theories and applications; proceedings of Eusipco-98, Ninth European Signal Processing Conference: Rhodes, Greece: 8-11 September 1998". Rhodes: 1998, p. 2245-2248.
URIhttp://hdl.handle.net/2117/103587
ISBN960-7620-06-4
Publisher versionhttp://ieeexplore.ieee.org/document/7089545/
Collections
Share: