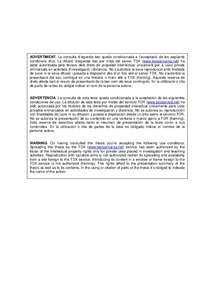 ; Westerberg, Lars-Göran
Chair / Department / Institute
Universitat Politècnica de Catalunya. Departament d'Enginyeria Mecànica
Document typeDoctoral thesis
PublisherUniversitat Politècnica de Catalunya
Rights accessOpen Access
Abstract
Manufacturers of wind turbines have observed a new phenomenon that appears in high power wind turbines: excessive wear in the teeth located at 0º in the pitch bearing. In order to design more efficient wind turbines, manufacturers are increasing the rotor diameter to capture more kinetic energy from the wind to generate more energy, therefore the stress in the joints/unions is increased, which leads to the elastic deformation of the system. These stresses and deformations increase in all parts of the wind turbine, the foundations and the tower, yaw, nacelle, drive train and blade unions. All these cases are mainly static unions, except the drive train that transmits torque, the yaw system that turns the nacelle and the pitch system that turns each blade around its axis. The weight of the blades under movement, always working in the most efficient position, causes micro-movements allowed by the elastic deformations and the backlash of the gear transmission that induce an excessive wear at the zero degree position. The same phenomenon is observed in the yaw system, though to a lesser extent. Despite the manufacturer's efforts, a solution that could be implemented in the near future or easily retrofitted in the wind turbines does not yet exist. The aim of this PhD project is to improve the lubrication of the pitch and yaw gear systems of wind turbines through the use of a novel lubrication system based on an array of micro-fabricated channels fitted at the gears' root (dedendum). A micro-nozzle to continuously inject fresh grease in between the teeth in contact has been designed, manufactured and installed in a test bench of a 2 MW wind turbine pitch system. The test bench has been used to characterize the fatigue behavior of the gear surface using conventional wind turbine greases under real cyclic loads, showing a delay of 2x10^4 cycles in the appearance of wear. The proposed micro-nozzle is expected to be compatible with and easily implemented into both newly designed and in-market models. This novel lubrication system will inject fresh lubricant to the gear contact area even when the wind turbine is generating electricity.
Description
Tesi per compendi de publicacions. La consulta íntegra de la tesi, inclosos els articles no comunicats públicament per drets d'autor, es pot realitzar prèvia petició a l'Arxiu de la UPC
CitationFarré Lladós, J. Novel lubrication system to improve the excessive wear in wind turbine yaw and pitch gears. Tesi doctoral, UPC, Departament d'Enginyeria Mecànica, 2015. Available at: <http://hdl.handle.net/2117/103569>
URIhttp://hdl.handle.net/2117/103569
Collections
Share: