Stability hierarchy between Piracetam forms I, II, and III from experimental pressure–temperature diagrams and topological inferences 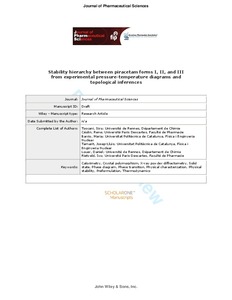 Louër, Daniel
Rietveld, Ivo B.
Document typeArticle
Rights accessOpen Access
Abstract
The trimorphism of the active pharmaceutical ingredient piracetam is a famous case of polymorphism that has been frequently revisited by many researchers. The phase relationships between forms I, II, and III were ambiguous because they seemed to depend on the heating rate of the DSC and on the history of the samples or they have not been observed at all (equilibrium II–III). In the present paper, piezo-thermal analysis and high-pressure differential thermal analysis have been used to elucidate the positions of the different solid–solid and solid–liquid equilibria. The phase diagram, involving the three solid phases, the liquid phase and the vapor phase, has been constructed. It has been shown that form III is the high-pressure, low-temperature form and the stable form at room temperature. Form II is stable under intermediary conditions and form I is the low pressure, high temperature form, which possesses a stable melting point. The present paper demonstrates the strength of the topological approach based on the Clapeyron equation and the alternation rule when combined with high-pressure measurements.
CitationToscani, S., Céolin, R., Ter Minassian, L., Del Barrio, M., Veglio, N., Tamarit, J. Ll., Louër, D., Rietveld, I. Stability hierarchy between Piracetam forms I, II, and III from experimental pressure–temperature diagrams and topological inferences. "International journal of pharmaceutics", 30 Gener 2016, vol. 497, núm. 1-2, p. 96-105.
URIhttp://hdl.handle.net/2117/103564
DOI10.1016/j.ijpharm.2015.11.036
ISSN0378-5173
Publisher versionhttp://www.sciencedirect.com/science/article/pii/S0378517315303811
Collections
Share: