Nanotransformation of vancomycin overcomes the intrinsic resistance of Gram-negative bacteria 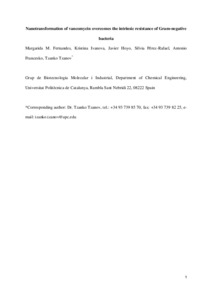 Document typeArticle
Rights accessOpen Access
Abstract
The increased emergence of antibiotic-resistant bacteria is a growing public health concern, and although new drugs are constantly being sought, the pace of development is slow compared with the evolution and spread of multidrug- resistant species. In this study, we developed a novel broad-spectrum antimicrobial agent by simply transforming vancomycin into nanoform using sonochemistry. Vancomycin is a glycopeptide antibiotic largely used for the treatment of infections caused by Gram-positive bacteria but inefficient against Gram-negative species. The nanospherization extended its effect toward Gram-negative Escherichia coli and Pseudomonas aeruginosa, making these bacteria up to 10 and 100 times more sensitive to the antibiotic, respectively. The spheres were able to disrupt the outer membranes of these bacteria, overcoming their intrinsic resistance toward glycopeptides. The penetration of nanospheres into a Langmuir monolayer of bacterial membrane phospholipids confirmed the interaction of the nanoantibiotic with the membrane of E. coli cells, affecting their physical integrity, as further visualized by scanning electron microscopy. Such mechanism of antibacterial action is unlikely to induce mutations in the evolutionary conserved bacterial membrane, therefore reducing the possibility of acquiring resistance. Our results indicated that the nanotransformation of vancomycin could overcome the inherent resistance of Gram-negative bacteria toward this antibiotic and disrupt mature biofilms at antibacterial-effective concentrations.
CitationFernandes, M.M., Ivanova, K., Hoyo, J., Perez-Rafael, S., Francesko, A., Tzanov, T. Nanotransformation of vancomycin overcomes the intrinsic resistance of Gram-negative bacteria. "ACS applied materials and interfaces", 10 Abril 2017.
URIhttp://hdl.handle.net/2117/103542
DOI10.1021/acsami.7b00217
ISSN1944-8244
Publisher versionhttp://pubs.acs.org/doi/abs/10.1021/acsami.7b00217
Collections
Share: