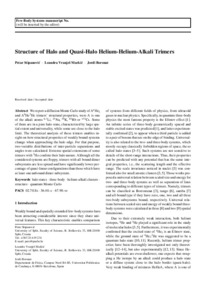 Document typeArticle
Rights accessOpen Access
Abstract
We report a diffusion Monte Carlo study of A4He2 and A4He3He trimers’ structural properties, were A is one of the alkali atoms 6,7Li, 23Na, 39K, 85Rb or 133Cs. Some of them are in a pure halo state, characterized by large spatial extent and universality, while some are close to the halo limit. The theoretical analysis of these trimers enables insight on how structural properties of weakly bound systems change when approaching the halo edge. For that purpose, two-variable distributions of inter-particle separations and angles were calculated. Extreme spatial extensions of some trimers with 3He confirm their halo nature. Although all the considered systems are floppy, trimers with all bound dimer subsystems are less spread and have significantly lower percentage of quasi-linear configurations than those which have at least one unbound dimer subsystem.
CitationStipanovic, P., Leandra, V., Boronat, J. Structure of halo and quasi-halo helium–helium–alkali trimers. "Few-body systems", 1 Maig 2017, vol. 58, p. 1-5.
URIhttp://hdl.handle.net/2117/103533
DOI10.1007/s00601-017-1288-0
ISSN0177-7963
Publisher versionhttp://link.springer.com/article/10.1007%2Fs00601-017-1288-0
Collections
Share: