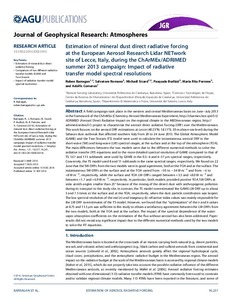 Document typeArticle
Rights accessOpen Access
Abstract
A field campaign took place in the western and central Mediterranean basin on June–July 2013 in the framework of the ChArMEx (Chemistry-Aerosol Mediterranean Experiment, http://charmex.lsce.ipsl.fr/)/ADRIMED (Aerosol Direct Radiative Impact on the regional climate in the MEDiterranean region, http://adrimed.sedoo.fr/) project to characterize the aerosol direct radiative forcing (DRF) over the Mediterranean. This work focuses on the aerosol DRF estimations at Lecce (40.33°N; 18.11°E; 30¿m above sea level) during the Saharan dust outbreak that affected southern Italy from 20 to 24 June 2013. The Global Atmospheric Model (GAME) and the Two-Stream (TS) model were used to calculate the instantaneous aerosol DRF in the short-wave (SW) and long-wave (LW) spectral ranges, at the surface and at the top of the atmosphere (TOA). The main differences between the two models were due to the different numerical methods to solve the radiative transfer (RT) equations and to the more detailed spectral resolution of GAME compared to that of TS. 167 and 115 subbands were used by GAME in the 0.3–4 and 4–37¿µm spectral ranges, respectively. Conversely, the TS model used 8 and 11 subbands in the same spectral ranges, respectively. We found on 22 June that the SW-DRFs from the two models were in good agreement, both at the TOA and at the surface. The instantaneous SW-DRFs at the surface and at the TOA varied from -50 to -34¿W¿m-2 and from -6 to +8¿W¿m-2, respectively, while the surface and TOA LW-DRFs ranged between +3.5 and +8.0¿W¿m-2 and between +1.7 and +6.9¿W¿m-2, respectively. In particular, both models provided positive TOA SW-DRFs at solar zenith angles smaller than 25° because of the mixing of the desert dust with anthropogenic pollution during its transport to the study site. In contrast, the TS model overestimated the GAME LW-DRF up to about 5 and 7.5 times at the surface and at the TOA, respectively, when the dust particle contribution was largest. The low spectral resolution of the real (n) and imaginary (k) refractive index values was mainly responsible for the LW-DRF overestimates of the TS model. However, we found that the “optimization” of the n and k values at 8.75 and 11.5¿µm was sufficient in this study to obtain a satisfactory agreement between the LW-DRFs from the two models, both at the TOA and at the surface. The impact of the spectral dependence of the water vapor absorption coefficients on the estimation of the flux without aerosol has also been addressed. Paper results did not reveal any significant impact due to the different numerical methods used by the two models to solve the RT equations.
Description
© 2016. American Geophysical Union
CitationBarragan, R., Salvatore, R., Sicard, M., Burlizzi, P., Perrone, M-R., Comeron, A. Estimation of mineral dust direct radiative forcing at the European Aerosol Research Lidar NETwork site of Lecce, Italy, during the ChArMEx/ADRIMED summer 2013 campaign: Impact of radiative transfer model spectral resolutions. "Journal of geophysical research: atmospheres", 1 Setembre 2016, vol. 121, núm. 17, p. 10237-10261.
URIhttp://hdl.handle.net/2117/103502
DOI10.1002/2016JD025016
ISSN2169-8996
Publisher versionhttp://onlinelibrary.wiley.com/doi/10.1002/2016JD025016/abstract
Collections
Share: