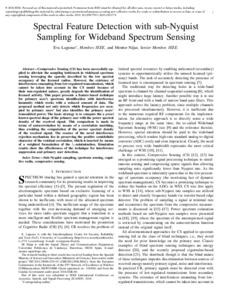 Document typeArticle
Rights accessOpen Access
Abstract
Compressive sensing (CS) has been successfully applied to alleviate the sampling bottleneck in wideband spectrum sensing leveraging the sparsity described by the low spectral occupancy of the licensed radios. However, the existence of interferences emanating from low-regulated transmissions, which cannot be taken into account in the CS model because of their non-regulated nature, greatly degrade the identification of licensed activity. This paper presents a feature-based technique for primary user's spectrum identification with interference immunity which works with a reduced amount of data. The proposed method not only detects which frequencies are occupied by primary users' but also identifies the primary users' transmitted power. The basic strategy is to compare the a priori known spectral shape of the primary user with the power spectral density of the received signal. This comparison ismade in terms of autocorrelation by means of a correlation matching, thus avoiding the computation of the power spectral density of the received signal. The essence of the novel interference rejection mechanism lies in preserving the positive semidefinite character of the residual correlation, which is inserted by means of a weighted formulation of the l(1)-minimization. Simulation results show the effectiveness of the technique for interference suppression and primary user detection.
CitationLagunas, E., Najar, M. Spectral feature detection with Sub-Nyquist sampling for wideband spectrum sensing. "IEEE transactions on wireless communications", 1 Juliol 2015, vol. 14, núm. 7, p. 3978-3990.
URIhttp://hdl.handle.net/2117/103450
DOI10.1109/TWC.2015.2415774
ISSN1536-1276
Publisher versionhttp://ieeexplore.ieee.org/stamp/stamp.jsp?arnumber=7065302
Collections
Share: