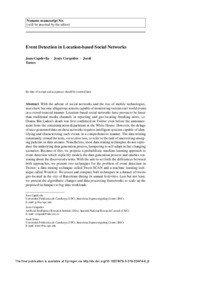 With the advent of social networks and the rise of mobile technologies, users have become ubiquitous sensors capable of monitoring various real-world events in a crowd-sourced manner. Location-based social networks have proven to be faster than traditional media channels in reporting and geo-locating breaking news, i.e. Osama Bin Laden’s death was first confirmed on Twitter even before the announcement from the communication department at the White House. However, the deluge of user-generated data on these networks requires intelligent systems capable of identifying and characterizing such events in a comprehensive manner. The data mining community coined the term, event detection , to refer to the task of uncovering emerging patterns in data streams . Nonetheless, most data mining techniques do not reproduce the underlying data generation process, hampering to self-adapt in fast-changing scenarios. Because of this, we propose a probabilistic machine learning approach to event detection which explicitly models the data generation process and enables reasoning about the discovered events. With the aim to set forth the differences between both approaches, we present two techniques for the problem of event detection in Twitter : a data mining technique called Tweet-SCAN and a machine learning technique called Warble. We assess and compare both techniques in a dataset of tweets geo-located in the city of Barcelona during its annual festivities. Last but not least, we present the algorithmic changes and data processing frameworks to scale up the proposed techniques to big data workloads.
CitationCapdevila, J., Cerquides, J., Torres, J. Event detection in location-based social networks. A: "Data science and big data: An environment of computational intelligence". Berlín: Springer, 2017, p. 161-186.
URIhttp://hdl.handle.net/2117/103377
DOI10.1007/978-3-319-53474-9_8
ISBN978-3-319-53473-2
Publisher versionhttp://link.springer.com/chapter/10.1007%2F978-3-319-53474-9_8