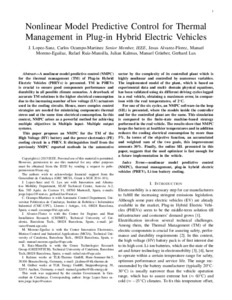 A nonlinear model predictive control (NMPC) for the thermal management (TM) of Plug-in Hybrid Electric Vehicles (PHEVs) is presented. TM in PHEVs is crucial to ensure good components performance and durability in all possible climate scenarios. A drawback of accurate TM solutions is the higher electrical consumption due to the increasing number of low voltage (LV) actuators used in the cooling circuits. Hence, more complex control strategies are needed for minimizing components thermal stress and at the same time electrical consumption. In this context, NMPC arises as a powerful method for achieving multiple objectives in Multiple input- Multiple output systems. This paper proposes an NMPC for the TM of the High Voltage (HV) battery and the power electronics (PE) cooling circuit in a PHEV. It distinguishes itself from the previously NMPC reported methods in the automotive sector by the complexity of its controlled plant which is highly nonlinear and controlled by numerous variables. The implemented model of the plant, which is based on experimental data and multi- domain physical equations, has been validated using six different driving cycles logged in a real vehicle, obtaining a maximum error, in comparison with the real temperatures, of 2C. For one of the six cycles, an NMPC software-in-the loop (SIL) is presented, where the models inside the controller and for the controlled plant are the same. This simulation is compared to the finite-state machine-based strategy performed in the real vehicle. The results show that NMPC keeps the battery at healthier temperatures and in addition reduces the cooling electrical consumption by more than 5%. In terms of the objective function, an accumulated and weighted sum of the two goals, this improvement amounts 30%. Finally, the online SIL presented in this paper, suggests that the used optimizer is fast enough for a future implementation in the vehicle.

© 2016 IEEE. Personal use of this material is permitted. Permission from IEEE must be obtained for all other uses, in any current or future media, including reprinting/republishing this material for advertising or promotional purposes, creating new collective works, for resale or redistribution to servers or lists, or reuse of any copyrighted component of this work in other works.
CitationLopez, J., Ocampo-Martinez, C.A., Alvarez, J.A., Moreno-Eguilaz, J.M., Ruiz Mansilla, R. Nonlinear model predictive control for thermal management in plug-in hybrid electric vehicles. "IEEE transactions on vehicular technology", 2 Agost 2016, núm. 99, p. 1-15.
URIhttp://hdl.handle.net/2117/103254
DOI10.1109/TVT.2016.2597242
ISSN0018-9545
Publisher versionhttp://winet.ece.ufl.edu/tvt/