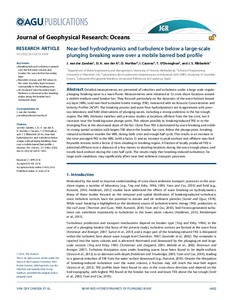 Detailed measurements are presented of velocities and turbulence under a large-scale regular plunging breaking wave in a wave flume. Measurements were obtained at 12 cross-shore locations around a mobile medium-sand breaker bar. They focused particularly on the dynamics of the wave bottom boundary layer (WBL) and near-bed turbulent kinetic energy (TKE), measured with an Acoustic Concentration and Velocity Profiler (ACVP). The breaking process and outer flow hydrodynamics are in agreement with previous laboratory and field observations of plunging waves, including a strong undertow in the bar trough region. The WBL thickness matches with previous studies at locations offshore from the bar crest, but it increases near the breaking-wave plunge point. This relates possibly to breaking-induced TKE or to the diverging flow at the shoreward slope of the bar. Outer flow TKE is dominated by wave breaking and exhibits strong spatial variation with largest TKE above the breaker bar crest. Below the plunge point, breaking-induced turbulence invades the WBL during both crest and trough half cycle. This results in an increase in the time-averaged TKE in the WBL (with a factor 3) and an increase in peak onshore and offshore near-bed Reynolds stresses (with a factor 2) from shoaling to breaking region. A fraction of locally produced TKE is advected offshore over a distance of a few meters to shoaling locations during the wave trough phase, and travels back onshore during the crest half cycle. The results imply that breaking-induced turbulence, for large-scale conditions, may significantly affect near-bed sediment transport processes.
CitationVan der Zanden, J., van der A, D., Hurther, D., Caceres, I., O'Donoghue, T., Ribberink, J. Nera-bed hydrodynamics and turbulence below a large-scale plunging breaking wave over a mobile barred bed profile. "Journal of geophysical research: oceans", 3 Agost 2016, vol. 121, p. 6482-6506.
URIhttp://hdl.handle.net/2117/103250
DOI10.1002/2016JC011909
ISSN2169-9291
Publisher versionhttp://onlinelibrary.wiley.com/doi/10.1002/2016JC011909/pdf