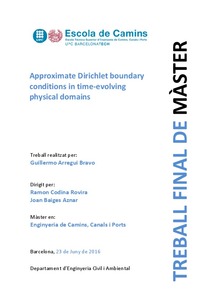 Document typeMaster thesis
Rights accessOpen Access
Abstract
In many coupled fluid-structure problems of practical interest the domain of at least one of the problems evolves in time. The most often applied approach to deal with such motion in numerical methods is the use of the Arbitrary Eulerian-Lagrangian (ALE) framework. However, the use of a pure fixed-mesh could allow us to get rid of choosing the arbitrary mesh velocity and is often more adapted for fluid motion. Nevertheless, several other problems arise from such a strategy when applied to the finite element method (FEM), especially regarding the application of Dirichlet boundary conditions (BCs). The usual strategy to prescribe Dirichlet BCs in FEM is to define the boundary of the domain by placing nodes and facets on it, which allows us to strongly impose the condition by defining the unknown as such in the given nodes. However, it is quite straightforward to see that if a fixed-mesh strategy is to be used on, for example, a solid moving domain inside a fluid, non-matching or non-conforming grids will appear at every time step of calculation. In this cases, the boundary geometry intersects the boundary cells in an arbitrary way. To solve such a problem several techniques have been developed, such as the immersed boundary method, the penalty method, Nitsche’s method, the use of Lagrange multipliers and other techniques that combine several of these strategies. These methods impose the BCs in an approximate way once the discretization has been carried out, either by modifying the differential operators near the interface (in finite differences) or by modifying the unknowns near the interface. In this work we describe such numerical techniques for approximating Dirichlet BCs for the transient incompressible Navier-Stokes (N-S) equations. Some of these techniques have been programmed on FEMUSS (Finite Element Method Using Subscale Stabilitzation), one of the multiphysics Fortran code used at the International Centre for Numerical Methods in Engineering (CIMNE) and we applied them to study the flow of fluids around time-evolving prescribed solids.
SubjectsFinite element method, Elements finits, Mètode dels
URIhttp://hdl.handle.net/2117/103215
Collections
Share: