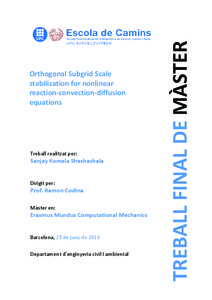 Except where otherwise noted, content on this work is licensed under a Creative Commons license : Attribution-NonCommercial 3.0 Spain
Abstract
Nonlinear reaction-convection-diffusion equations are encountered in modeling of a variety of natural phenomena such as in chemical reactions, population dynamics and contaminant dispersal. When the scale of convective and reactive phenomena are large, Galerkin finite element solution fails. As a remedy, Orthogonal Subgrid Scale stabilization is applied to the finite element formulation. It has its origins in the Variational Multi Scale approach. It is based on a fine grid - coarse grid component sum decomposition of solution and utilizes the fine grid solution orthogonal to the residual of the finite element coarse grid solution as a correction term. With selective mesh refinement, a stabilized oscillation-free solution that can capture sharp layers is obtained. Newton Raphson method is utilized for the linearization of nonlinear reaction terms. Backward difference scheme is used for time integration. The formulation is tested for cases with standalone and coupled systems of transient nonlinear reaction-convection-diffusion equations. Method of manufactured solution is used to test for correctness and bug-free implementation of the formulation. In the error analysis, optimal convergence is achieved. Applications in channel flow, cavity flow and predator-prey model is used to highlight the need and effectiveness of the stabilization technique.
SubjectsFinite element method, Elements finits, Mètode dels
DegreeMÀSTER UNIVERSITARI ERASMUS MUNDUS EN MECÀNICA COMPUTACIONAL (Pla 2013)
URIhttp://hdl.handle.net/2117/103214
Collections
Share: