Phasic firing and coincidence detection by subthreshold negative feedback: divisive or subtractive or, better, both 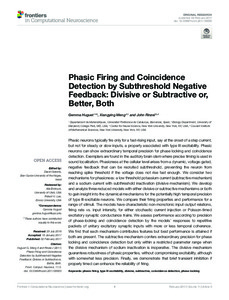 Meng, Xiangying
Rinzel, John
Document typeArticle
Rights accessOpen Access
Abstract
Phasic neurons typically fire only for a fast-rising input, say at the onset of a step current, but not for steady or slow inputs, a property associated with type III excitability. Phasic neurons can show extraordinary temporal precision for phase locking and coincidence detection. Exemplars are found in the auditory brain stem where precise timing is used in sound localization. Phasicness at the cellular level arises from a dynamic, voltage-gated, negative feedback that can be recruited subthreshold, preventing the neuron from reaching spike threshold if the voltage does not rise fast enough. We consider two mechanisms for phasicness: a low threshold potassium current (subtractive mechanism) and a sodium current with subthreshold inactivation (divisive mechanism). We develop and analyze three reduced models with either divisive or subtractive mechanisms or both to gain insight into the dynamical mechanisms for the potentially high temporal precision of type III-excitable neurons. We compare their firing properties and performance for a range of stimuli. The models have characteristic non-monotonic input-output relations, firing rate vs. input intensity, for either stochastic current injection or Poisson-timed excitatory synaptic conductance trains. We assess performance according to precision of phase-locking and coincidence detection by the models' responses to repetitive packets of unitary excitatory synaptic inputs with more or less temporal coherence. We find that each mechanism contributes features but best performance is attained if both are present. The subtractive mechanism confers extraordinary precision for phase locking and coincidence detection but only within a restricted parameter range when the divisive mechanism of sodium inactivation is inoperative. The divisive mechanism guarantees robustness of phasic properties, without compromising excitability, although with somewhat less precision. Finally, we demonstrate that brief transient inhibition if properly timed can enhance the reliability of firing.
CitationHuguet, G., Meng, X., Rinzel, J. Phasic firing and coincidence detection by subthreshold negative feedback: divisive or subtractive or, better, both. "Frontiers in computational neuroscience", 2 Febrer 2017, vol. 11, núm. 3, p. 1-20.
URIhttp://hdl.handle.net/2117/103191
DOI10.3389/fncom.2017.00003
ISSN1662-5188
Publisher versionhttp://journal.frontiersin.org/article/10.3389/fncom.2017.00003/full
Collections
Share: