Visualitza l'ítem
JavaScript is disabled for your browser. Some features of this site may not work without it. 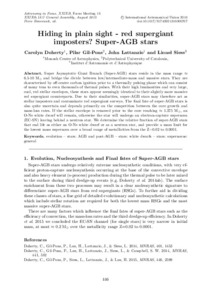 Super Asymptotic Giant Branch (Super-AGB) stars reside in the mass range ˜ 6.5-10 M¿ and bridge the divide between low/intermediate-mass and massive stars. They are characterised by off-centre carbon ignition prior to a thermally pulsing phase which can consist of many tens to even thousands of thermal pulses. With their high luminosities and very large, cool, red stellar envelopes, these stars appear seemingly identical to their slightly more massive red supergiant counterparts. Due to their similarities, super-AGB stars may therefore act as stellar imposters and contaminate red supergiant surveys. The final fate of super-AGB stars is also quite uncertain and depends primarily on the competition between the core growth and mass-loss rates. If the stellar envelope is removed prior to the core reaching ˜ 1.375 M¿, an O-Ne white dwarf will remain, otherwise the star will undergo an electron-capture supernova (EC-SN) leaving behind a neutron star. We determine the relative fraction of super-AGB stars that end life as either an O-Ne white dwarf or as a neutron star, and provide a mass limit for the lowest mass supernova over a broad range of metallicities from the Z=0.02 to 0.0001.
CitacióDoherty, C., Gil Pons, P., Lattanzio, J. C., Siess, L. Hiding in plain sight - red supergiant imposters? Super-AGB stars. A: IAU General Assembly. "Astronomy in Focus Volume 11 - Issue A29B - August 2015". Honolulu: Cambridge University Press, 2015, p. 446.
URIhttp://hdl.handle.net/2117/103185
DOI10.1017/S1743921316005767
Dipòsit legalDOI: https://doi.org/10.1017/S1743921316005767