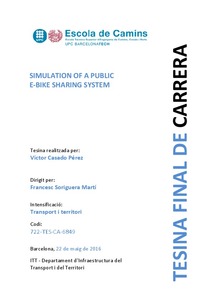 Except where otherwise noted, content on this work is licensed under a Creative Commons license : Attribution-NonCommercial 3.0 Spain
Abstract
Urban areas are in need of efficient and sustainable mobility service and it seems that one of the options that arouses more interest are public bicycles systems, which in the last decade have been promoted in cities all over the world almost exponentially, surpassing the 500 bike-sharing programs worldwide. This has resulted in a continuous evolution of these systems, which, due to their recent appearance, have practically gone ahead of the works focused on their study. This thesis intends to develop an agent-based simulation model to emulate a bikesharing system, in order to allow the optimization of the main strategic and tactical system variables, such as the total number of bicycles, the number of reposition equipment, the size of the stations and the occupancy after being repositioned, that is, its balanced occupancy. The model will be applied and validated with the parameter values of the system currently applied in Barcelona and an improved scenario will be posed to analyze the performance of a better hypothetical solution for balanced occupancy as an example of the simulator potential. The simulation is coded in Matlab® environment, using the paradigm of Object Oriented Programming, which aims to ease its use, understanding and expansion, following the open-source philosophy, which has proliferated in recent years. The document contains the description of the model and the performance of the program, its structure, and its validation. In addition, the source code can be found attached for its free download and use.
SubjectsBicycle commuting, Urban transportation, Desplaçaments en bicicleta, Transport urbà
DegreeENGINYERIA DE CAMINS, CANALS I PORTS (Pla 1995)
URIhttp://hdl.handle.net/2117/103128
Collections
Share: