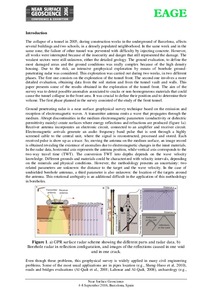 Document typeConference lecture
Rights accessOpen Access
Abstract
The collapse of a tunnel and the damage in a second tunnel during the construction works, forced to the assessment of the ground in the front tunnel of the second structure, in order to avoid additional problems. The first evaluation was carried out with a borehole radar, because the structure was in a populated zone of a dense city. The uncertainty associated to the near surface studies is, in this case, greater because the unshielded antennas produce a rotational ambiguity. The imprecision in the location of the targets was reduced using seven non-parallel boreholes. The results shows the anomalies that could be associated to faults and also an irregular area of the B-scans that could be related to heterogeneous materials and the existence of a large number of voids.
CitationPerez-Gracia, V., Caselles, J., Clapes, J., Canas, J. Tunnel assessment with borehole radar. A: European Meeting of Environmental and Engineering Geophysics. "Earthdoc - Proceedings of the 22nd European Meeting of Environmental and Engineering Geophysics - Near Surface Geosciences". Barcelona: 2017, p. 1-4.
URIhttp://hdl.handle.net/2117/103085
DOI10.3997/2214-4609.201601924
Publisher versionhttp://earthdoc.eage.org/publication/search?pubsearchkey=Tunnel+assessment+with+borehole+radar
Collections
Share: