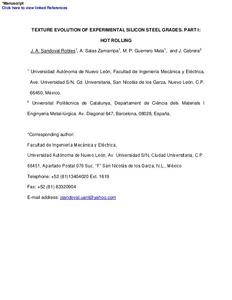 Document typeArticle
Rights accessOpen Access
Abstract
The metallurgical understanding of the deformation processes during the fabrication of non-oriented electrical steels plays a key role in improving their final properties. Texture control and optimization is critical in these steels for the enhancement of their magnetic properties. The aim of the present work is to study the texture evolution of six non-oriented experimental silicon steel grades during hot rolling. These steels were low carbon steel with a silicon content from 0.5 to 3.0 wt%. The first rolling schedule was performed in the austenitic (¿-Fe) region for the steel with a 0.5 wt% of silicon content, while the 1.0 wt% silicon steel was rolled in the two-phase (a+¿) region. Steels with higher silicon content were rolled in the ferritic (a-Fe) region. The second rolling schedule was performed in the a-Fe region. Samples of each stage were analyzed by means of Electron Backscatter Diffraction (EBSD). Findings showed that the texture was random and heterogeneous in all samples after 60% of rolling reduction, which is due to the low deformation applied during rolling. After the second rolling program, localized deformation and substructured grains near to surface were observed in all samples. The Goss {110}<001>texture-component was found in the 0.5 and 1.0 wt.-%silicon steels. This is due to the thermomechanical conditions and the corresponding hot band microstructure obtained after the first program. Moreover, the a<110>//RD and the ¿ <111>//ND fiber components of the texture presented a considerable increment as the silicon content increases. Future research to be published soon will be related to the texture evolution during the cold-work rolling process.
CitationSandoval, J., Salas, A., Guerrero, M., Cabrera, J. Texture evolution of experimental silicon steel grades. Part I: Hot rolling. "Journal of magnetism and magnetic materials", 1 Maig 2017, vol. 429, p. 367-371.
URIhttp://hdl.handle.net/2117/103031
DOI10.1016/j.jmmm.2016.10.163
ISSN0304-8853
Publisher versionhttp://www.sciencedirect.com/science/article/pii/S030488531632827X
Collections
Share: