Fmoc–RGDS based fibrils: atomistic details of their hierarchical assembly 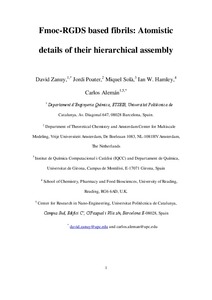 We describe the 3D supramolecular structure of Fmoc–RGDS fibrils, where Fmoc and RGDS refer to the hydrophobic N-(fluorenyl-9-methoxycarbonyl) group and the hydrophilic Arg-Gly-Asp-Ser peptide sequence, respectively. For this purpose, we performed atomistic all-atom molecular dynamics simulations of a wide variety of packing modes derived from both parallel and antiparallel ß-sheet configurations. The proposed model, which closely resembles the cross-ß core structure of amyloids, is stabilized by p–p stacking interactions between hydrophobic Fmoc groups. More specifically, in this organization, the Fmoc-groups of ß-strands belonging to the same ß-sheet form columns of p-stacked aromatic rings arranged in a parallel fashion. Eight of such columns pack laterally forming a compact and dense hydrophobic core, in which two central columns are surrounded by three adjacent columns on each side. In addition to such Fmoc¿Fmoc interactions, the hierarchical assembly of the constituent ß-strands involves a rich variety of intra- and inter-strand interactions. Accordingly, hydrogen bonding, salt bridges and p–p stacking interactions coexist in the highly ordered packing network proposed for the Fmoc–RGDS amphiphile. Quantum mechanical calculations, which have been performed to quantify the above referred interactions, confirm the decisive role played by the p–p stacking interactions between the rings of the Fmoc groups, even though both inter-strand and intra-strand hydrogen bonds and salt bridges also play a non-negligible role. Overall, these results provide a solid reference to complement the available experimental data, which are not precise enough to determine the fibril structure, and reconcile previous independent observations.
CitationZanuy, D., Poater, J., Solà, M., Hamley, ., Aleman, C. Fmoc–RGDS based fibrils: atomistic details of their hierarchical assembly. "Physical chemistry chemical physics", 14 Gener 2016, vol. 18, núm. 2, p. 1265-1278.
URIhttp://hdl.handle.net/2117/103025
DOI10.1039/c5cp04269k
ISSN1463-9076
Publisher versionhttp://pubs.rsc.org/en/Content/ArticleLanding/2016/CP/C5CP04269K#!divAbstract