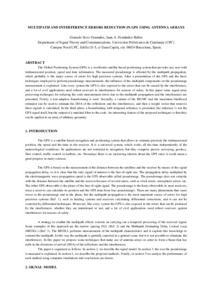 Document typeConference report
PublisherESA PUBLICATIONS DIVISION
Rights accessOpen Access
Abstract
The Global Positioning System (GPS) is a worldwide satellite based positioning system that provides any user with tridimensional position, speed and time information. The measured pseudorange is affected by the multipath propagation, which probably is the major source of errors for high precision systems. After a presentation of the GPS and the basic techniques employed to perform pseudorange measurements, the influence of the multipath components on the pseudorange measurement is explained. Like every system the GPS is also exposed to the errors that can be caused by the interferences, and a lot of civil applications need robust receivers to interferences for reasons of safety. In this paper some signal array processing techniques for reducing the code measurement errors due to the multipath propagation and the interferences are presented. Firstly, a non-adaptive beamforming is used. Secondly, a variant of the MUSIC and the maximum likelihood estimator can be used to estimate the DOA of the reflections and the interferences, and then a weight vector that removes these signals is calculated. In the third place, a beamforming with temporal reference is presented; the reference is not the GPS signal itself, but the output of a matched filter to the code. An interesting feature of the proposed techniques is that they can be applied to an array of arbitrary geometry.
CitationSeco, G., Fernandez, J. Multipath and interference errors reduction in gps using antenna arrays. A: FIFTH ESA INTERNATIONAL WORKSHOP ON DIGITAL SIGNAL PROCESSING TECHNIQUES APPLIED TO SPACE COMMUNICATIONS. "FIFTH ESA INTERNATIONAL WORKSHOP ON DIGITAL SIGNAL PROCESSING TECHNIQUES APPLIED TO SPACE COMMUNICATIONS". Sitges: ESA PUBLICATIONS DIVISION, 1996.
URIhttp://hdl.handle.net/2117/102958
Collections
Share: