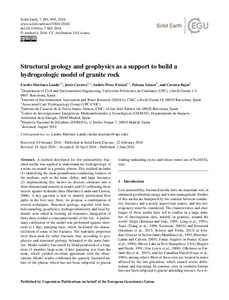 Perez Estaun, A.
Gomez, Paloma
Bajos, Carmen
Document typeArticle
Rights accessOpen Access
Abstract
A method developed for low-permeability fractured media was applied to understand the hydrogeology of a mine excavated in a granitic pluton. This method includes (1) identifying the main groundwater-conducting features of the medium, such as the mine, dykes, and large fractures, (2) implementing this factors as discrete elements into a three-dimensional numerical model, and (3) calibrating these factors against hydraulic data (Martinez-Landa and Carrera 2006). A key question is how to identify preferential flow paths in the first step. Here, we propose a combination of several techniques. Structural geology, together with borehole sampling, geophysics, hydrogeochemistry, and local hydraulic tests aided in locating all structures. Integration of these data yielded a conceptual model of the site. A preliminary calibration of the model was performed against short-term (< 1 day) pumping tests, which facilitated the characterization of some of the fractures. The hydraulic properties were then used for other fractures that, according to geophysics and structural geology, belonged to the same families. Model validity was tested by blind prediction of a long-term (4 months) large-scale (1 km) pumping test from the mine, which yielded excellent agreement with the observations. Model results confirmed the sparsely fractured nature of the pluton, which has not been subjected to glacial loading-unloading cycles and whose waters are of Na-HCO3 type.
CitationMartinez, L., Carrera, J., Perez, A., Gomez, P., Bajos, C. Structural geology and geophysics as a support to build a hydrogeologic model of granite rock. "Solid Earth", 2016, vol. 7, núm. 3, p. 881-895.
URIhttp://hdl.handle.net/2117/102933
DOI10.5194/se-7-881-2016
ISSN1869-9510
Publisher versionhttp://www.solid-earth.net/7/881/2016/
Collections
Share: