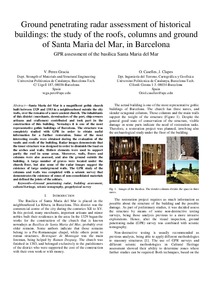 Document typeConference report
PublisherIEEE Press
Rights accessOpen Access
Abstract
Santa Maria del Mar is a magnificent gothic church built between 1329 and 1383 in a neighbourhood outside the city walls, over the remains of a more ancient church. The inhabitants of this district (merchants, downloaders of the port, ship-owners artisans and craftsmen) contributed and took part in the construction of this building. Nowadays it is one of the most representative gothic buildings of Barcelona. The structure was completely studied with GPR in order to obtain useful information for a further restoration. Some of the most interesting results were obtained during the evaluation of the vaults and roofs of the building. Radar images demonstrate that the inner structure was designed in order to diminish the load on the arches and walls. Hollow elements were used to support partly the roof in some areas. Moreover, walls, floors and columns were also assessed, and also the ground outside the building. A large number of graves were located under the church floor, but also some of the radar images suggest the existence of large underground walls. The GPR study of the columns and walls was completed with a seismic survey that demonstrates the existence of zones of non-consolidated materials and defined the joints of the ashlars.
Location
1: Sant Pere - Santa Caterina i la Ribera, Barcelona, Espanya
CitationPerez-Gracia, V., Caselles, J., Clapes, J. Ground penetrating radar assessment of historical buildings: the study of the roofs, columns and ground of Santa Maria del Mar, in Barcelona / GPR assessment of the basilica Santa Maria del Mar. A: Mediterranean Microwave Symposium. "Proceedings of 2015 IEEE 15th Mediterranean Microwave Symposium (MMS)". Lecce: IEEE Press, 2017, p. 498-501.
URIhttp://hdl.handle.net/2117/102847
DOI10.1109/MMS.2015.7375496
ISBN978-1-4673-7603-7
Publisher versionhttp://ieeexplore.ieee.org/document/7375496/
Collections
Share: