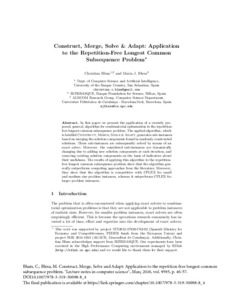 Document typeArticle
Rights accessOpen Access
Abstract
In this paper we present the application of a recently proposed, general, algorithm for combinatorial optimization to the repetition-free longest common subsequence problem. The applied algorithm, which is labelled Construct, Merge, Solve & Adapt, generates sub-instances based on merging the solution components found in randomly constructed solutions. These sub-instances are subsequently solved by means of an exact solver. Moreover, the considered sub-instances are dynamically changing due to adding new solution components at each iteration, and removing existing solution components on the basis of indicators about their usefulness. The results of applying this algorithm to the repetition-free longest common subsequence problem show that the algorithm generally outperforms competing approaches from the literature. Moreover, they show that the algorithm is competitive with CPLEX for small and medium size problem instances, whereas it outperforms CPLEX for larger problem instances.
CitationBlum, C., Blesa, M. Construct, Merge, Solve and Adapt: Application to the repetition-free longest common subsequence problem. "Lecture notes in computer science", Març 2016, vol. 9595, p. 46-57.
URIhttp://hdl.handle.net/2117/102814
DOI10.1007/978-3-319-30698-8_4
ISSN0302-9743
Publisher versionhttps://link.springer.com/chapter/10.1007/978-3-319-30698-8_4
Collections
Share: