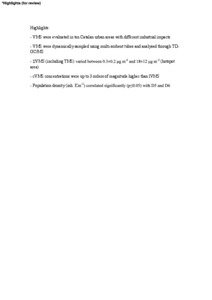 Guardino Solà, Xavier
Gadea Carrera, Enrique
Document typeArticle
Rights accessOpen Access
Abstract
Volatile methyl siloxanes (VMS) were evaluated in ten Catalan urban areas with different industrial impacts, such as petrochemical industry, electrical and mechanical equipment, metallurgical and chemical industries, municipal solid waste treatment plant and cement and food industries, during 2013–2015. 24 h samples were taken with LCMA-UPC pump samplers specially designed in our laboratory, with a flow range of 70 ml min-1. A sorbent-based sampling method, successfully developed to collect a wide-range of VOC, was used. The analysis was performed by automatic thermal desorption coupled with capillary gas chromatography/mass spectrometry detector. The presented methodology allows the evaluation of VMS together with a wide range of other VOC, increasing the number of compounds that can be determined in outdoor air quality assessment of urban areas. This aspect is especially relevant as a restriction of several VMS (D4 and D5) in consumer products has been made by the European Chemicals Agency and US EPA is evaluating to include D4 in the Toxic Substances Control Act, regarding the concern of the possible effects of these compounds in human health and the environment. SVMS concentrations (L2-L5, D3-D6 and trimethylsilanol) varied between 0.3 ± 0.2 µg m-3 and 18 ± 12 µg m-3, determined in a hotspot area. Observed VMS concentrations were generally of the same order of magnitude than the previously determined in Barcelona, Chicago and Zurich urban areas, but higher than the published from suburban sites and Arctic locations. Cyclic siloxanes concentrations were up to two-three orders of magnitude higher than those of linear siloxanes, accounting for average contributions to the total concentrations of 97 ± 6% for all samples except for the hotspot area, where cyclic VMS accounted for 99.9 ± 0.1%. D5 was the most abundant siloxane in 5 sampling points; however, differing from the generally observed in previous studies, D3 was the most abundant compound in the other 5 sampling points.
CitationGallego, E., Perales, J., Roca, F., Guardino, X., Gadea, E. Volatile methyl siloxanes (VMS) concentrations in outdoor air of several Catalan urban areas. "Atmospheric environment", 1 Abril 2017, vol. 155, p. 108-118.
URIhttp://hdl.handle.net/2117/102790
DOI10.1016/j.atmosenv.2017.02.013
ISSN1352-2310
Publisher versionhttp://www.sciencedirect.com/science/article/pii/S1352231017300833
Collections
Share: