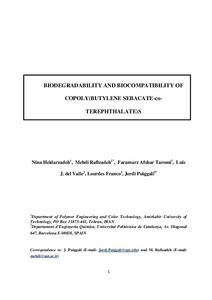 Except where otherwise noted, content on this work is licensed under a Creative Commons license : Attribution-NonCommercial-NoDerivs 3.0 Spain
Abstract
In the present study poly (butylene sebacate-co-terephthalate)s having different compositions were synthesized with a high yield and a random distribution by thermal transesterification of poly (butylene sebacate) and poly (butylene terephthalate) homopolymers. The copolymer with the highest comonomer ratio was the least crystalline sample, although the melting peaks corresponding to both, sebacate and terephthalate-rich phases were still observable in calorimetric heating runs. This copolymer was associated with interesting thermal and mechanical properties, as the maximum melting point was higher than 100 °C and the storage modulus was also high (i.e. 1.1 × 109 N/m2 and 1.7 108 N/m2 were determined just before and after the main glass transition temperature of -12 °C). As all studied samples were thermally stable up to temperatures clearly higher than the fusion temperature, they could be easily processed. Increasing the terephthalate content of the copolymers resulted in higher hydrophobicity, which had a minor influence on cell adhesion and proliferation of both fibroblast-like and epithelial-like cells. Hydrolytic and enzymatic degradability were assessed and the effect of composition and crystallinity on the degradation rate was investigated. Molecular weight measurements during exposure to a hydrolytic media indicated a first order kinetic mechanism during the initial stages of degradation before reaching a limiting molecular size, which was indicative of solubilization. The most amorphous sample appears as a highly promising biodegradable material since it showed a significant weight loss during exposure to all selected degradation media, but also exhibited good performance and properties that were comparable to those characteristic of polyethylene
CitationHeidarzadeh, N., Mehdi Rafizadeh, M., Faramarz Afshar Taromi, F., del Valle, LJ., Franco, M., Puiggali, J. Biodegradability and biocompatibility of copoly(butylene sebacate-co-terephthalate)s. "Polymer degradation and stability", 1 Gener 2017, vol. 135, p. 18-30.
URIhttp://hdl.handle.net/2117/102786
DOI10.1016/j.polymdegradstab.2016.11.013
ISSN0141-3910
Publisher versionhttp://www.sciencedirect.com/science/article/pii/S0141391016303482
Collections
Share: