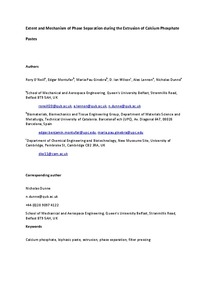 Wilson, Ian
Lennon, Alex
Dunne, Nicholas
CovenanteeQueen's University of Belfast
Document typeArticle
PublisherSpringer
Rights accessOpen Access
Abstract
The aim of this study was to increase understanding of the mechanism and dominant drivers influencing phase separation during ram extrusion of calcium phosphate (CaP) paste for orthopaedic applications. The liquid content of extrudate was determined, and the flow of liquid and powder phases within the syringe barrel during extrusion were observed, subject to various extrusion parameters. Increasing the initial liquid-to-powder mass ratio, LPR, (0.4–0.45), plunger rate (5–20 mm/min), and tapering the barrel exit (45°–90°) significantly reduced the extent of phase separation. Phase separation values ranged from (6.22 ± 0.69 to 18.94 ± 0.69 %). However altering needle geometry had no significant effect on phase separation. From powder tracing and liquid content determination, static zones of powder and a non-uniform liquid distribution was observed within the barrel. Measurements of extrudate and paste LPR within the barrel indicated that extrudate LPR remained constant during extrusion, while LPR of paste within the barrel decreased steadily. These observations indicate the mechanism of phase separation was located within the syringe barrel. Therefore phase separation can be attributed to either; (1) the liquid being forced downstream by an increase in pore pressure as a result of powder consolidation due to the pressure exerted by the plunger or (2) the liquid being drawn from paste within the barrel, due to suction, driven by dilation of the solids matrix at the barrel exit. Differentiating between these two mechanisms is difficult; however results obtained suggest that suction is the dominant phase separation mechanism occurring during extrusion of CaP paste.
CitationO'Neill, R., McCarthy, H., Cunningham, E., Montufar, E., Ginebra, M.P., Wilson, I., Lennon, A., Dunne , N. Extent and mechanism of phase separation during the extrusion of calcium phosphate pastes. "Journal of materials science. Materials in medicine", Febrer 2016.
URIhttp://hdl.handle.net/2117/102774
DOI10.1007/s10856-015-5615-z
ISSN0957-4530
Publisher versionhttp://link.springer.com/article/10.1007%2Fs10856-015-5615-z#enumeration
Collections
Share: