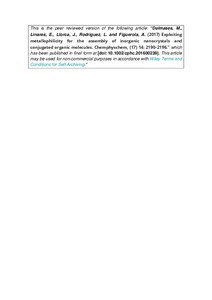 Rodríguez Raurell, Laura
Figuerola, Albert
Document typeArticle
Rights accessOpen Access
Abstract
The accurate engineering of interfaces between inorganic nanocrystals and semiconducting organic molecules is currently viewed as key for further developments in critical fields such as photovoltaics and photocatalysis. In this work, a new and unconventional source of interface interaction based on metal–metal bonds is presented. With this aim, an AuI organometallic gelator was exploited for the formation of hydrogel-like nanocomposites containing inorganic nanoparticles and conjugated organic molecules. Noteworthy, the establishment of metallophilic interactions at the interface between the two moieties greatly enhances interparticle coupling in the composites. Thus, we believe that this new hybrid system might represent a promising alternative in several fields, such as in the fabrication of improved light-harvesting devices.
CitationDalmases, M., Aguilo, E., Llorca, J., Rodríguez, L., Figuerola, A. Exploiting metallophilicity for the assembly of inorganic nanocrystals and conjugated organic molecules. "Chemphyschem", 18 Juliol 2016, vol. 17, núm. 14, p. 2190-2196.
URIhttp://hdl.handle.net/2117/102769
DOI10.1002/cphc.201600239
ISSN1439-4235
Publisher versionhttp://onlinelibrary.wiley.com/doi/10.1002/cphc.201600239/abstract
Collections
Share: