Comparing observed damages and losses with modelled ones using a probabilistic approach: the Lorca 2011 case 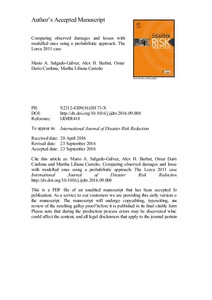 Except where otherwise noted, content on this work is licensed under a Creative Commons license : Attribution-NonCommercial-NoDerivs 3.0 Spain
Abstract
A loss and damage assessment was performed for the buildings of Lorca, Spain, considering an earthquake hazard scenario with similar characteristics to those of a real event which occurred on May 11th, 2011, in terms of epicentre, depth and magnitude while also considering the local soil response. This low-to moderate earthquake caused severe damage and disruption in the region and especially on the city. A building by building resolution database was developed and used for damage and loss assessment. The portfolio of buildings was characterized by means of indexes capturing information from a structural point of view such as age, main construction materials, number of stories, and building class as well as others related to age and vulnerability classes. A replacement cost approach was selected for the analysis in order to calculate the direct losses incurred by the event. Seismic hazard and vulnerability were modelled in a probabilistic way, considering their inherent uncertainties which were also taken into account in the damage and loss calculation process. Losses have been expressed in terms of the mean damage ratio of each dwelling and since the analysis has been performed on a geographical information system platform, the distribution of the damage and its categories was mapped for the entire urban centre. The simulated damages and losses were compared with the observed ones reported by the local authorities and institutions that inspected the city after the event.
CitationSalgado-Gálvez, M.A., Barbat, A. H., Cardona, O.D., Carreño, M.L. Comparing observed damages and losses with modelled ones using a probabilistic approach: the Lorca 2011 case. "International journal of disaster risk reduction", Octubre 2016, vol. 19, p. 355-365.
URIhttp://hdl.handle.net/2117/102762
DOI10.1016/j.ijdrr.2016.09.008
ISSN2212-4209
Publisher versionhttp://www.sciencedirect.com/science/article/pii/S221242091630173X
Collections
Share: