Morphological changes, beach inundation and overwash caused by an extreme storm on a low-lying embayed beach bounded by a dune system (NW Mediterranean) 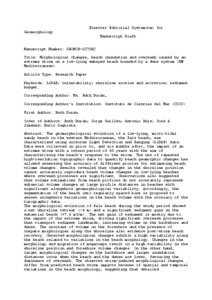 Sagrista, Enric
Document typeArticle
Rights accessOpen Access
Abstract
The geomorphological evolution of a low-lying, micro-tidal sandy beach in the western Mediterranean, Pals beach, was characterized using airborne Light Detection and Ranging (LiDAR) data. Data were collected in prior to and six months after the impact of an extreme storm with a return period of approx. 50 years, with the aim of characterizing the beach's response to the storm. The use of repeated high-resolution topographic data to quantify beach geomorphic changes has allowed assessment of the accuracy of different proxies for estimating beach volume changes. Results revealed that changes in the shoreline position cannot accurately reproduce beach volume changes on low-lying beaches where overwash processes are significant. Observations also suggested that volume estimations from beach profiles do not accurately represent subaerial volume changes at large profile distances on beaches with significant alongshore geomorphological variability. Accordingly, the segmentation of the beach into regularly spaced bins is proposed to assess alongshore variations in the beach volume with the accuracy of the topographic data. The morphological evolution of Pals beach during the study period showed a net shoreline retreat (- 4 m) and a significant sediment gain on the subaerial beach (+ 7.5 m3/m). The net gain of sediment is mostly due to the impact of the extreme storm, driving significant overwash processes that transport sediment landwards, increasing volume on the backshore and dunes. The increase of volume on the foreshore and the presence of cuspate morphologies along the shoreline also evidence post-storm beach recovery. Observed morphological changes exhibit a high variability along the beach related to variations in beach morphology. Changes in the morphology and migration of megacusps result in a high variability in the shoreline position and foreshore volume changes. On the other hand, larger morphological changes on the backshore and larger inundation distances occur when the beach and the dunes are lower, favouring the dominance of overwash. The observed storm-induced morphological changes differ from predicted beach storm impacts because of spatial and temporal variations in the beach morphology, suggesting that detailed morphological parameters and indicators used for predicting beach vulnerability to storms should be regularly updated in order to represent the pre-storm beach conditions. Finally, observed morphological changes in Pals Bay evidenced a different behaviour between natural and urban areas, with better post-storm beach recovery on natural areas where the beach is not artificially narrowed.
CitationDuran, R., Guillén, J., Ruiz , A., Jimenez, J.A., Sagrista, E. Morphological changes, beach inundation and overwash caused by an extreme storm on a low-lying embayed beach bounded by a dune system (NW Mediterranean). "Geomorphology", Desembre 2016, vol. 274, p. 129-142.
URIhttp://hdl.handle.net/2117/102761
DOI10.1016/j.geomorph.2016.09.012
ISSN0169-555X
Publisher versionhttp://www.sciencedirect.com/science/article/pii/S0169555X16308297
Collections
Share: