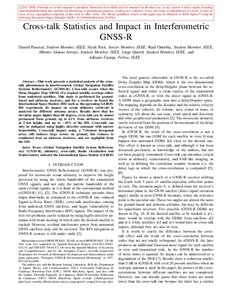 Document typeArticle
Rights accessOpen Access
Abstract
This paper presents a statistical analysis of the crosstalk phenomenon in interferometric Global Navigation Satellite Systems Reflectometry (iGNSS-R). Crosstalk occurs when the Delay-Doppler Map (DDM) of a tracked satellite overlaps others fromundesired satellites. This study is performed for ground-based and airborne receivers and for a receiver onboard the International Space Station (ISS) such as the upcoming GNSS Reflectometry, Radio Occultation and Scatterometry onboard ISS experiment. Its impact on ocean altimetry retrievals is analyzed for different antenna arrays. Results show that for elevation angles higher than 60 degrees, crosstalk can be almost permanent from ground, up to 61% from airborne receivers at 2-km height, and up to similar to 10% at the ISS. Crosstalk can only be mitigated using highly directive antennas with narrow beamwidths. Crosstalk impact using a seven-element hexagonal array still induces large errors on ground, but reduces to centimeter level on airborne receivers, and is negligible from the ISS.
Description
©2016 IEEE. Personal use of this material is permitted. Permission from IEEE must be obtained for all other uses, in any current or future media, including reprinting/republishing this material for advertising or promotional purposes, creating new collective works, for resale or redistribution to servers or lists, or reuse of any copyrighted component of this work in other works.
CitationPascual, D., Park, H., Onrubia, R., Alonso-Arroyo, A., Querol, J., Camps, A. Cross-talk statistics and impact in interferometric GNSS-R. "IEEE journal of selected topics in applied earth observations and remote sensing", 23 Juny 2016, vol. 9, núm. 10, p. 4621-4630.
URIhttp://hdl.handle.net/2117/102728
DOI10.1109/JSTARS.2016.2551981
ISSN1939-1404
Publisher versionhttp://ieeexplore.ieee.org/document/7498568/
Collections
Share: