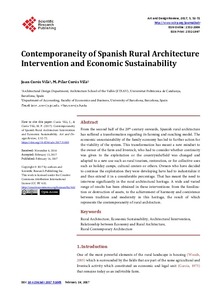 Except where otherwise noted, content on this work is licensed under a Creative Commons license : Attribution-NonCommercial-NoDerivs 3.0 Spain
Abstract
From the second half of the 20th century onwards, Spanish rural architecture has suffered a transformation regarding its farming and ranching model. The economic unsustainability of the family economy has led to further action for the viability of the system. This transformation has meant a new mindset to the owner of the farm and livestock, who had to consider whether continuity was given to the exploitation or the countryside/field was changed and adapted to a new use such as rural tourism, restoration, or for collective uses such as holiday camps, cultural centers or others. Owners who have decided to continue the exploitation they were developing have had to industrialize it and thus extend it in a considerable percentage. That has meant the need to intervene significantly in the rural architectural heritage. A wide and varied range of results has been obtained in these interventions: from the fossilization or destruction of assets, to the achievement of harmony and coexistence between tradition and modernity in this heritage, the result of which represents the contemporaneity of rural architecture.
CitationCuros, J., Curós, P. Contemporaneity of Spain rural architecture Intervention and economic sustainability. "Art and Design Review", 16 Febrer 2017, vol. 5, p. 52-72.
URIhttp://hdl.handle.net/2117/102678
DOI10.4236/adr.2017.51005
ISSN2332-2004
Collections
Share: