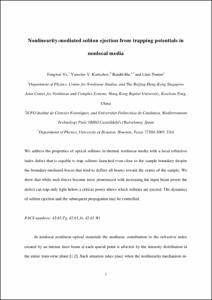 Document typeArticle
Rights accessOpen Access
Abstract
We address the properties of optical solitons in thermal nonlinear media with a local refractive index defect that is capable to trap solitons launched even close to the sample boundary despite the boundary-mediated forces that tend to deflect all beams toward the center of the sample. We show that while such forces become more pronounced with increasing the input beam power the defect can trap only light below a critical power above which solitons are ejected. The dynamics of soliton ejection and the subsequent propagation may be controlled.
CitationFangwei, Y. [et al.]. Nonlinearity-mediated soliton ejection from trapping potentials in nonlocal media. "Physical review A", 30 Agost 2010, vol. 82, núm. 2, p. 1-15.
URIhttp://hdl.handle.net/2117/10262
DOI10.1103/PhysRevA.82.023822
ISSN1050-2947
Publisher versionhttp://arxiv.org/ftp/arxiv/papers/1007/1007.4858.pdf
Collections
Share: