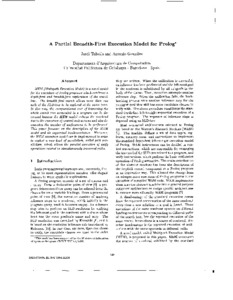 Document typeConference report
PublisherInstitute of Electrical and Electronics Engineers (IEEE)
Rights accessOpen Access
Abstract
Speculative thread-level parallelism has been recently proposed as an alternative source of parallelism that can boost the performance for applications where independent threads are hard to find. Several schemes to exploit thread level parallelism have been proposed and significant performance gains have been reported. However, the sources of the performance gains are poorly understood as well as the impact of some design choices. In this work, the advantages of different thread speculation techniques are analyzed as are the impact of some critical issues including the value predictor, the branch predictor, the thread initialization overhead and the connectivity among thread units
CitationMarcuello, P., González, A. A quantitative assessment of thread-level speculation techniques. A: International Parallel and Distributed Processing Symposium. "International Parallel and Distributed Processing Symposium, IPDPS 2000: 1-5 May 2000 Cancun, Mexico: proceedings". Cancún: Institute of Electrical and Electronics Engineers (IEEE), 2000, p. 595-601.
URIhttp://hdl.handle.net/2117/102590
DOI10.1109/IPDPS.2000.846040
ISBN0-7695-0574-0
Publisher versionhttp://ieeexplore.ieee.org/xpls/abs_all.jsp?arnumber=846040
Collections
Share: