Analyzing the multilevel structure of the European airport network 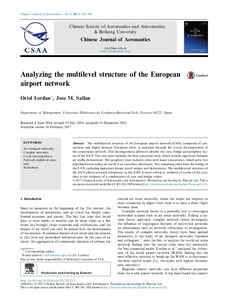 Document typeArticle
Rights accessOpen Access
Abstract
The multilayered structure of the European airport network (EAN), composed of connections and flights between European cities, is analyzed through the k-core decomposition of the connections network. This decomposition allows to identify the core, bridge and periphery layers of the EAN. The core layer includes the best-connected cities, which include important business air traffic destinations. The periphery layer includes cities with lesser connections, which serve low populated areas where air travel is an economic alternative. The remaining cities form the bridge of the EAN, including important leisure travel origins and destinations. The multilayered structure of the EAN affects network robustness, as the EAN is more robust to isolation of nodes of the core, than to the isolation of a combination of core and bridge nodes.
CitationLordan, O., Sallan, J. Analyzing the multilevel structure of the European airport network. "Chinese Journal of Aeronautics", Abril 2017. Vol. 30, núm. 2, p. 554-560
URIhttp://hdl.handle.net/2117/102583
DOI10.1016/j.cja.2017.01.013
ISSN1000-9361
Collections
Share: