Reversibility of fouling on ultrafiltration membrane by backwashing and chemical cleaning: differences in organic fractions behaviour 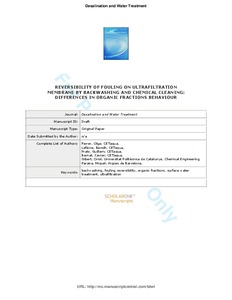 Paraira Cardona, Miquel
Document typeArticle
Rights accessOpen Access
Abstract
Membrane fouling is an inherent phenomenon in ultrafiltration (UF) membrane processes, making it necessary to periodically perform backwashes (BW) and chemical cleanings in place (CIP) to restore the initial permeability of the membrane. The objective of this study was (1) to explore systematically the effect of distinct BW-related variables (BW transmembrane pressure, duration, frequency and composition) on the reversibility of UF membrane fouling and on the permeate quality (in terms of total organic carbon, turbidity and UV absorbance) over successive filtration/BW cycles; and (2) to identify which organic fractions were most removed by the membrane and, of these, which were most detached after BW, alkaline and oxidant CIP and acid CIP episodes. For this purpose, a bench-scale outside-in hollow fibre module operated under dead-end filtration mode at constant transmembrane pressure and treating settled water from a drinking water treatment plant was employed. Dissolved organic carbon fractionation was performed by high-performance size-exclusion chromatography. Results showed that, in general, the more intensive the BW was (in terms of high transmembrane pressure, shortened frequency and prolonged duration) the more effective it was in removing fouling from the membrane. Concerning the composition of the water used for the BW, the addition of NaClO led to maximum fouling reversibility, closely followed by the combination of NaOH+NaClO, while citric acid and NaOH contributed little compared to water alone. However, results also showed that irreversible fouling was never completely avoided whatever the BW regime applied, leading to a gradual increase in the total resistance over time. Larger differences in the behaviour of the different organic fractions were observed. UF membrane preferentially retained the heaviest fraction of biopolymers (BP), while the intermediate fraction of humic substances (HS) was removed at a lower percentage and the lighter fractions seemed to entirely pass through the UF membrane. The successive application of BW and CIPs resulted in the detachment from the membrane of a significant percentage of the retained BP, whereas only a modest percentage of the retained HS.
CitationFerrer, O., Lefevre, B., Prats, G., Bernat, X., Gibert, O., Paraira, M. Reversibility of fouling on ultrafiltration membrane by backwashing and chemical cleaning: differences in organic fractions behaviour. "Desalination and water treatment", 20 Maig 2016, vol. 57, núm. 19, p. 8593-8607.
URIhttp://hdl.handle.net/2117/102568
DOI10.1080/19443994.2015.1022807
ISSN1944-3994
Publisher versionhttp://www.tandfonline.com/doi/full/10.1080/19443994.2015.1022807
Collections
Share: