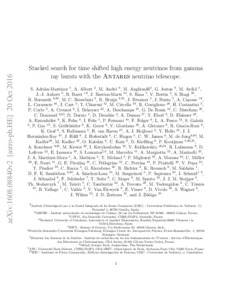 A search for high-energy neutrino emission correlated with gamma-ray bursts outside the electromagnetic prompt-emission time window is presented. Using a stacking approach of the time delays between reported gamma-ray burst alerts and spatially coincident muon-neutrino signatures, data from the Antares neutrino telescope recorded between 2007 and 2012 are analysed. One year of public data from the IceCube detector between 2008 and 2009 have been also investigated. The respective timing profiles are scanned for statistically significant accumulations within 40 days of the Gamma Ray Burst, as expected from Lorentz Invariance Violation effects and some astrophysical models. No significant excess over the expected accidental coincidence rate could be found in either of the two data sets. The average strength of the neutrino signal is found to be fainter than one detectable neutrino signal per hundred gamma-ray bursts in the Antares data at 90% confidence level.
CitationAdrian-Martinez, S., Albert, A., Andre, M., Anghinolfi, M. Stacked search for time shifted high energy neutrinos from gamma ray bursts with the Antares neutrino telescope. "European physical journal C", 10 Gener 2017, vol. 77, núm. 20.
URIhttp://hdl.handle.net/2117/102525
DOI10.1140/epjc/s10052-016-4496-8
ISSN1434-6044
Publisher versionhttp://link.springer.com/article/10.1140%2Fepjc%2Fs10052-016-4496-8#aboutarticle