Evolution and dynamics of a matter creation model 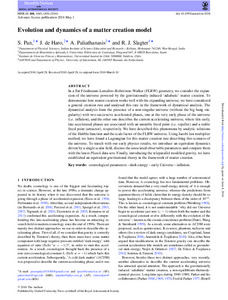 Paliathanasis, A.
Slagter, R.J.
Document typeArticle
Rights accessOpen Access
Abstract
In a flat Friedmann–Lemaître–Robertson–Walker (FLRW) geometry, we consider the expansion of the universe powered by the gravitationally induced ‘adiabatic’ matter creation. To demonstrate how matter creation works well with the expanding universe, we have considered a general creation rate and analysed this rate in the framework of dynamical analysis. The dynamical analysis hints the presence of a non-singular universe (without the big bang singularity) with two successive accelerated phases, one at the very early phase of the universe (i.e. inflation), and the other one describes the current accelerating universe, where this early, late accelerated phases are associated with an unstable fixed point (i.e. repeller) and a stable fixed point (attractor), respectively. We have described this phenomena by analytic solutions of the Hubble function and the scale factor of the FLRW universe. Using Jacobi last multiplier method, we have found a Lagrangian for this matter creation rate describing this scenario of the universe. To match with our early physics results, we introduce an equivalent dynamics driven by a single scalar field, discuss the associated observable parameters and compare them with the latest Planck data sets. Finally, introducing the teleparallel modified gravity, we have established an equivalent gravitational theory in the framework of matter creation.
CitationPan, S., Haro, J., Paliathanasis, A., Slagter, R. Evolution and dynamics of a matter creation model. "Monthly notices of the Royal Astronomical Society", 1 Maig 2016, vol. 460, núm. 2, p. 1445-1456.
URIhttp://hdl.handle.net/2117/102510
DOI10.1093/mnras/stw1034
ISSN0035-8711
Publisher versionhttps://academic.oup.com/mnras/article-abstract/460/2/1445/2608959/Evolution-and-dynamics-of-a-matter-creation-model?redirectedFrom=fulltext
Collections
Share: