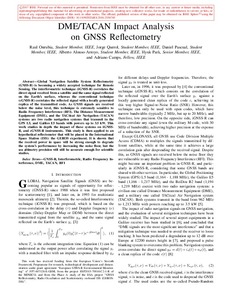 Document typeArticle
Rights accessOpen Access
All rights reserved. This work is protected by the corresponding intellectual and industrial property rights. Without prejudice to any existing legal exemptions, reproduction, distribution, public communication or transformation of this work are prohibited without permission of the copyright holder
Abstract
Global navigation satellite system reflectometry (GNSS-R) is becoming a widely accepted technique for remote sensing. The interferometric technique (iGNSS-R) correlates the direct signal received from a satellite and the same signal reflected on the Earth's surface, whereas the conventional technique (cGNSS-R) correlates the reflected signal with a locally generated replica of the transmitted code. As GNSS signals are received below the noise level, this technique is extremely sensitive to radio frequency interference. The distance measurement equipment, and the TACtical air navigation systems are two radio navigation systems that transmit in the GPS L5, and Galileo E5 bands with powers up to 3.5 kW. This work studies in depth the impact of these systems on iGNSS-R, and cGNSS-R instruments. This study is then applied to a hypothetical reflectometer that will be placed in the international space station: The GEROS experiment. It is shown that the received power in space will be strong enough to degrade the system's performance by increasing the noise floor, but the sea altimetry precision will still be accurate enough for scientific studies.
Description
©2016 IEEE. Personal use of this material is permitted. Permission from IEEE must be obtained for all other uses, in any current or future media, including reprinting/republishing this material for advertising or promotional purposes, creating new collective works, for resale or redistribution to servers or lists, or reuse of any copyrighted component of this work in other works.
CitationOnrubia, R., Querol, J., Pascual, D., Alonso-Arroyo, A., Park, H., Camps, A. DME/TACAN impact analysis on GNSS reflectometry. "IEEE journal of selected topics in applied earth observations and remote sensing", 31 Maig 2016, vol. 9, núm. 10, p. 4611-4620.
URIhttp://hdl.handle.net/2117/102422
DOI10.1109/JSTARS.2016.2556745
ISSN1939-1404
Publisher versionhttp://ieeexplore.ieee.org/document/7482749/
Collections
Share: